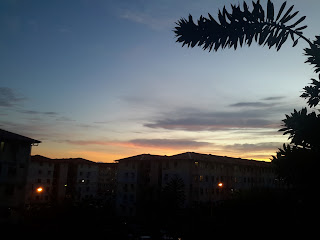 Sometimes we think we belong to a tiny minority of the faithful and when persecution comes we feel we are all alone. It is perhaps how the apostle Paul felt in Corinth having preached there for 18 months with much persecution the Lord Jesus had to appear to him in a night vision to encourage him to continue speaking and preaching. Last night in the home group of my homechurch I felt a bit awkward speaking up as a former pastor and also not being present for the best part of 8 years, what right has an occasional worshiper to speak? But my close friend preached a powerful message. He was just an ordinary person selling cakes and mee for breakfast around the city but he loved the Lord. His message came from 1 Cor 12 where Paul teaches about being in one body but many members with each member different from one another yet needing one another and as part of the body contributes to growth and well being of the body as a whole. The head cannot say to the foot I don't need you. I recited this verse when it was my turn to share. I said in my denomination's heirarchy I am just a foot soldier but the general cannot say I don't need you. For the past 6 weeks since my tenure ended at the College I am left in the dark concerning my future and almost everyday now with social media and instant messaging technology I have friends and colleagues near and far asking how I am doing and whether I've received a new appointment.
I can feel discouraged about the whole process and waiting business but I draw strength that the Lord is with me and He will not allow anyone to hurt me and there are many people in the city that are for me.  A vast majority of my homechurch members still think highly of me including a majority of leaders. Now my connections are not just in KK but in Ranau having spent 18 months there (like Paul in Corinth) I have many friends. Yesterday two pastors from Ranau contacted me. One other pastor from Tenom, one elder from Taginambur, a sister from Penang, a few from the College not just the students but senior leaders. I felt encouraged that there are many people of the Lord who are for me and desire to see the well being of His servant.
at August 04, 2016