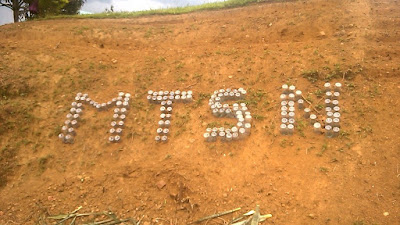 The passage in prophet Jeremiah continues that it is not in man who walks to direct his own ways (Jer 10,23b). How true God's Word remains and it is settled forever in heaven. Only 10 days ago I have no idea where I was going, not a sign to indicate where my future lies. But now in less than 6 days since returning to College it is as if I had never left.
My students and most of my colleagues welcomed me with open arms. During the first and second morning of Chapel services I was called upon to say prayers before the Principal made the announcement as to my appointment yesterday. But many things happened in 5 days. I dined with the students as usual. I stayed in my little room as usual. But hopefully not for long as I had just spoken to a friend who might be able to help repair a wooden house for me to live in. This afternoon we welcomed a prayer group that made a round trip around Mount Kinabalu since 4am. Our College is the second last stop and I was called upon by the Dean of students to say the prayers on behalf of the College. So I prayed and the Lord listened from the heavens. When the students dispersed they gathered for a photo taking session and they shouted out to me to join them. LORD You have restored me to my family, those who listen to God's Word and do them.