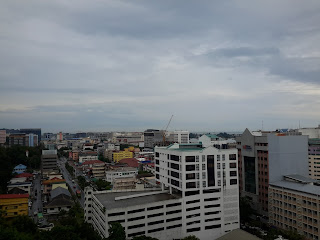 I am listening to a song my former student sent me an hour ago. I listened to it for a third time overlooking the city of Kota Kinabalu. This is the third song I received from my students in the past weeks and each time I was greatly ministered to, so much so that I wept before the Lord. No wonder I like the Psalms which are the songs of the Lord that move the hearts and souls and bring us clsoer to God and into His presence. Last Saturday waves and waves of God's love were poured into my heart as I sang song after song, all Malay or Indonesian songs. Last Sunday I attended an English service where the sermon was good but none of the songs moved me a bit. I think it is a sign for me to remain in the BM (bahasa Malaysia) ministry. There is just something about the Malay worship songs , so moving so melodious so anointed it melts the heart and causes it to bow before the Lord.
The Lord has given 150 songs in the Psalter for us, one new song for 5 months according to the five books of the Psalter, perhaps one book for a month where we worship according to the Psalms of David. Speaking of months, it is my 2nd month without a ministry position but not without ministry. August will be a quiet month as I have no speaking engagements. Three weekends of December are already taken up in 3 different districts for Christmas celebrations and sermons. It could be my last Christmas in Sabah, I really don't know and how best to celebrate it and bud farewell to close friends and churches that have supported me all these years, perhaps not financially but by opening their pulpits that is a sure sign of support because not all men have faith.
at August 03, 2016