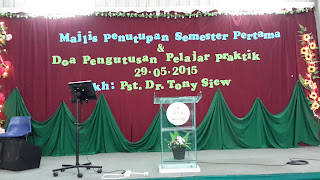 Both David and Solomon asked this question of themselves, "who am I?" I preached from these two texts last night at the Closing Service of the College. I told my audience that knowing the answer to this question determines our sense of mission and ultimately our fruitfulness in ministry. First, Solomon was the most unlikely candidate for kingship. David had many other sons older than Solomon and in many ways more qualified than him. Solomon was the son of Bathsheba with whom David committed adultery. Although David later took Bathsheba as wife, Solomon was born under a cloak of darkness and probably the most bitter period in the life of David as God judged him for his adultery and murder. But as 1 Chr 29,1 states Solomon was the one God chose to be king after David. Solomon was beloved of the Lord when he was born and given a name to reflect that, Jedidiah before he did anything good or bad.


Who am I has this answer that we are chosen by God to be his servants whatever our background and personal history. Second, David is said to build the house of the Lord out of his love for the Lord's dwelling and a servant of God must love the church, those whom he serves. Third, how David gave generously to the building project and inspired the leaders of Israel to do likewise (1Chr 29,6). This is the power of example, a role model for all to follow and a pastor or elder does well if he remembers this. In 2 Chr 2,6 Solomon asked this question who is he to build a house for God except that it would be a place to offer sacrifices. As leader, we lead God's house to offer praise and worship to the living God.

I saw how the Principal in his gentleness leads his colleagues to praise the Lord in songs. The students respond accordingly when they see the Faculty united in heart and mind.  After the end of the service at 10.20pm we had supper fellowship and as we bid one another goodbye I was already thinking of the sermon I was going to preach this Sunday.
at May 30, 2015