English, the Language of my Heart 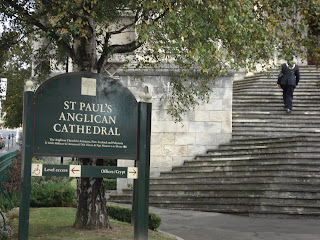 The Lord saved me in New Zealand. My first church in NZ for 6 years was a Kiwi-European church. When I sing the Lord's songs via Youtube, I sing in English. English is my first language and English is the language of my heart, my heart before the Lord. Several times over I thought I would serve in an English European setting. It might be in New Zealand and it might be in Australia. It might be in England for before long there might not be a United Kingdom. I followed the outcome of the British elections like a fervent Anglophone. I never lost sight of my spiritual roots which are in English. Lord, grant me my heart's desire that I might serve You in the Anglo-Saxon world where English is the language of the soul, the language of my heart.

My plan to start to start an English service has been consigned to the dustbin of history. I'd afraid there will be no resurrection unless I have an associate or assistant pastor who is bilingual (Malay & English speaking). Otherwise, I do not wish to run myself to the ground. I have often thought after the second service I could go down to KK and rest and return early Tuesday morning to Ranau. But often by Sunday evening with meetings after two services, I am exhausted and Monday is a day that I recuperate from the labours of Tuesday to Sunday.

I have week night meetings throughout the whole week again. Tuesday was the prayer meeting. Wednesday was the mid-week service. Thursday we had a church meeting to prepare for Mother's Day. Friday I went and preached in a village cell group about 10 mins' drive away. Saturday I went to the worship rehearsal but this time I stayed around for less than 30 minutes as I had to rest and prepare for preaching in 2 Sunday services. Whether I work less or more, I don't get a cent more. My church members have been loving and responsive. Most of them are farmers and like Amos a shepherd of flocks and tenderer of sycamore trees. I received two sacks of brown and black rice of high quality from a church member yesterday. It's pity that I rarely cook. I eat out most of the time and cash is probably more useful with Ranau prices dearer than KK's. Now I need to find a place to store my several bags of rice which can last until the end of the year. Thanks be unto God for His grace for men shall not live by rice alone but by every word that proceeds from the mouth of God.
at May 11, 2015