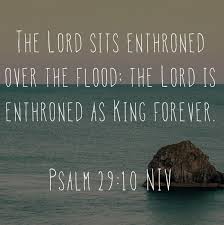 When the invitation came a week ago for a Youth Conference in Nabawan/Pensiangan one of the last frontier interior Districts, my initial reaction was "not again". My Christmas travels had dealt a psychological blow not least mentally and also physically. As per the norm I asked for 2 or 3 days before deciding on the invitation and I did pray everyday and asked the Lord but perhaps due to the intensity of the orientation week, my prayers were short and not as fervent. So after three days feeling that I should not let the organizers wait too long for an answer I texted him that I could not accept the invitation. I told him that I felt no urging to go and speak at the Conference. Almost immediately I felt a tinge of regret but I cast it aside as human feelings and not be too bothered about turning down one invitation. But the Conference invitation kept tugging and nudging my heart and on Saturday I read Psalm 29,10 that the Lord is enthroned over the flood and straightway I remember my last visit to Nabawan during one of the worst natural disasters to hit Sabah where more than 200 people perished due to floods and strong currents sweeping houses built on riverbanks during Christmas night and early 26th December. I witnessed first hand what it became known as Greg Storm when we drove from Nabawan to Keningau and I saw many people died and not a few clinging on dear life on rooftops and climbed to the top of the trees. I realized I must go back to the place and see for myself how the church is doing.
Yesterday on Sunday I worshipped in my homechurch and listening a good friend and fellow pastor preached I was more convinced than ever that I should go into the interior once more. It seems that most doors for ministry in the cities are closed though a couple of churches in KK had invited me to preach. I felt in the Lord that now is the time for me to focus mainly on mission work and interior mission work for that matter so that the not so rich, not so well educated, village folks, humble men and women, young people, secondary school students can listen to God's Word preached to them.  Incredible feeling that was when I texted the organizers again and said I was available if they had not found someone else to fill my slots. I wasn't very hopeful because there are quite a number of itinerant speakers within my denomination and this Youth Conference is a major one combining altogether 9 interior districts and they are holding them in a church that can seat almost 1,000 people, one of the biggest churches in the interior.
at January 16, 2017