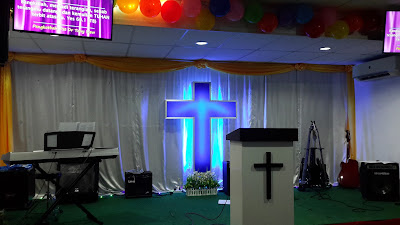 I think one of the greatest preaching methods is expository preaching and last night I did just that. Expository preaching does not need to be academic or dry or simply historical but it should be lively and relevant as all preaching at the end of the day seeks to edify the hearers. I was invited to preach at the 1st anniversary of a church started by a family friend, one of my first few friends when I joined my homechurch in 1989. The main leaders of my homechurch were there including the Chairman, youth pastor, and even the District Superintendent for KK district. As the service was done before dinner and started 7.10pm I was already very hungry by the time I got up to preach at 8pm sharp. I was determined to preach for no more than 30 mins and I kept up the promise but expounding on 3 or 4 points briefly from Isaiah 60,1-7.
First I told them that the Lord acts in response of faith and hence the call to rise and shine even as the Lord will shine and manifest his glory among His people. I told the congregation just a little of the historical context of the exile where after 50 years of settling down in a foreign country it must be difficult to rise and leave the homes behind and return to the promised land. I cited an example how the priests had to get their feet wet before God acted to part the Jordan river. Stepping out in faith is required for any mighty deed of God through his church.

Second, I spoke about the darkness that is covering the world with the fall of morality not just in the West but the world generally. Who could have guessed in the last 5 years gay marriage will be legalised throughout the USA and most Western countries that supposedly are Christian or pride themselves as coming from the Judeo-Christian heritage. But as the world gets darker, the church shines brighter with us upholding the word of truth in righteousness and holiness.

Third, I spoke about God shaking the heavens and earth and the wealth of nations coming into the church. I mentioned how during the Ranau earthquake and my subsequent aftershock God spoke to me during the Day of mourning for the victims from Haggai 2 and the Isaianic passages. I mentioned from the day of earthquake how Singapore Christians and churches have blessed the ministry of Sabahans. Days after the earthquake I received a large donation from a Singaporean donor and used the money to bless the family of one mountain guide who was killed on Mount Kinabalu and also the ministry of the pastors fellowship of Ranau as a whole. Even now my salary is supported by Singaporeans and the wealth of nations will come into Sabah's churches. The interior work needs much funding. I just heard from a former student how her fellow pastor struggled to visit the churches under her care, some 14 churches spread across an area 4 or 5 times bigger than Singapore and needing 4 wheel drive to access most of these interior churches. If I have a project in the near future it would be realise funds to buy a good second hand 4 wheel drive for one of interior Districts. Perhaps for the use of the whole District and pastors who visit and travel to far away churches could use the vehicle. I know by experience having driven 35,000 kms in 2 years without my Triton pickup most of ministry simply cannot be done.

Fourth, I talked about nations streaming into the church as they see the glory of God and the power of the Lord manifested in her services. I spoke about kings coming to our light and important it is in the context of Malaysia being ruled by non Christian rulers that we have Christian leaders like Daniel, Nehemiah and Ezra. I spoke about how GOD will beautify his house with people who are gifted and much grace and peace will flow from the ministry of the church led by godly leaders. Finally I challenged SIB especially the Superintendent being present, also one of my oldest friends in SIB, that there is a need for at least one or two SIB mega churches (1,000 to 2,000 members) in the city of Kota Kinabalu being the capital city of Sabah.
at January 31, 2017