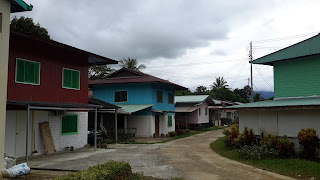 As Obama ends his 8-year presidency Donald Trump is set to begin a new era in his presidency. Transition ends at 12 noon Washington DC time when the President-Elect takes the Oath of Office and becomes the 45th President of the United States.  I have gone through so many transitions that it has almost attained a permanent state. A permanent state of transition is perhaps the Christian paradox of this life on earth as we do not have a permanent place here but we look towards the city of God where God is. At least I have ended one transition tonight as I moved into my new house and for the first time will be spending the night in the new place. Last night we held our home group with my 7 students. One of them called my new house "the White House" as the ground level is painted white inside and outside and I can't help noticing the pun that today there will be a new occupant who will enter the White House half the world yonder.
Only that for the world the POTUS is seen as the most powerful man on earth and his every movement and now every tweet reported across the world. This humble white house occupant dwells in a mostly wooden structure far away from civilization. Now a year has gone but I am still woken up several times a night from the cries of frogs and all kinds of insects and beasts that live in the wilderness.  Yet heavens shine on the place where His servants are, quietly without fanfare doing His bidding. God knows every thought and every deed and every good intention and act will surely be rewarded by the Almighty. Last night I preached from Luke 16 on the rich man and Lazarus with the title, God cares for the poor and testified that I began my SIB ministry like most pastors before and after me with nothing or penniless. Blessed are you poor for yours shall be the kingdom of God (Luke 6).
at January 20, 2017