The Year Ahead & Year Just Past 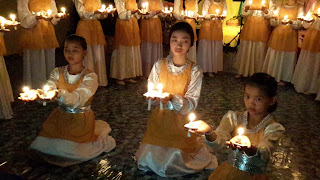 It is certainly not without trepidation that I look toward the year ahead. With Russia and China flexing their military might and the new incoming President of the United States, and the state of terrorism in the last few days of 2016 remind us that the world we live in is getting unstable by the year or even by the month. This year's general elections in Germany and France will see how much populism and nationalism have again taken roots and in fact flourish in national and continental politics that will have regional and global repercussions. In Malaysia, the year ended with the currency lowest in 19 years, at RM3.1 to 1SGD. I celebrated New Year's Eve gathering in my homechurch in KK, the first time I attended the church in several months. I wanted to show myself and connect with my church members some of whom I have known fof 28 years and a church I had pastored for more than 5 years. When asked to give year's end testimony, I stood up and proceeded to share for about 12 minutes and testified to God's goodness in three matters. For what God had done in my life and ministry last year I could have spoken for 2 hours. So to make it short and not take up time so that others could also participate, I only shared three things. First God's work in my ministry as pastor of my Ranau church in the first quarter of 2016 and how the church grew solidly and we were looking for a double unit to cater for increased membership over 2 Sunday services when I resigned.
This is in contrast to my home church that a few testified had seen a decrease in worshippers over 2016. Second, my time at College and how God used the short time I had as Acting Principal to effect changes and third, my travels in the last two months where except in a couple of places I saw God working to bring His people back to Him in repentance and reconsecration. I also testified about Bible translations since the brother before me was trying to promote a translation that had recently came out. Malaysia will never see a good Malay translation unless they use the people God had equipped with the original languages, English, Malay, and a thorough theological grasp of issues involved in translation within the local contexts. So before a translation can better the one published by Indonesia many decades ago, I will stick to my Bahasa Indonesia version (Terjemahan Baru). For sure there are some Indonesian words that will appear foreign to Malaysian readers of Malay but the Indonesian version is still the most accurate and it remains a classic, very much like the KJV for English readers.

I also testified about my two trips overseas in Singapore and Korea. In Singapore I reconnected with friends and shared how I attended a former student's wedding and met up with 10 former students there. I must now have 100 or more former students pastoring churches in Singapore and throughout South East Asia. For instance in the last couple of years I received 2 or 3 wedding invitations to Vietnam and I have at least 10 former Vietnamese students serving in their country. I also shared how in South Korea the Vice President of the Korean New Testament Society testified that in South Korea alone they have 300 PhD holders in New Testament second only to USA, but in Malaysia I can count with the fingers of one hand the number of PhDs in NT. I did not go on to add that in Malaysia in general and in Sabah in particular they don't quite appreciate academic scholarship. It is sad when GOD'S gifts to His church are not recognised the churches are much poorer for it.

I testified of God's provision for me throughout 2016 where several parts or at different times, I lived by faith literally without knowing when the next cheque or money will come in. Coupled by the expensive maintenance and running costs of my pick up truck which is a necessity given my interior mission work I can only praise God for His gracious provision. Only once when asked, I had informed my son of my needs, even then it was done in order that my son could honour his parents from his gainful employment which in itself is a gift of God and answer to prayers. Lord You have indeed crowned the year with Your Goodness and following Your paths our paths are filled with the fatness of Your Spirit's anointing (Psalm 65,11).
at January 02, 2017